Mr. Wellinghoff of the FERC famously said “I think baseload capacity is going to become an anachronism. Baseload capacity really used to only mean in an economic dispatch, which you dispatch first, what would be the cheapest thing to do.” Since then the debate between those that believe baseload is, for the foreseeable future, required and those that believe, like Mr. Wellinghoff that baseload is an anachronism of the 20th century. In fact, recently a paper published by an economist at Duke University claims that North Carolina (apparently serving as a proxy for the entire country) does not require any baseload capacity and that wind and solar can pretty much take care of everything. I have some issues with this latest paper. The author makes some rather sweeping assumptions at the outset regarding a 28% reduction in TOTAL consumption based on his observations of 100 houses and how large the impact of demand response can be from smartgrid initiatives.

As usual, I decided to “do the math” on this issue using government data or, at least, reasonably reputable data for my research. Because I’m no expert on the detailed workings of power generation, and neither are most of my readers, I’m going to make some extremely simplistic assumptions just to try to get at an understanding of the trend and reasonableness of energy generation claims.

First, we need to establish both the history and a mutually understood and accepted forecast of electricity usage in the state of North Carolina. 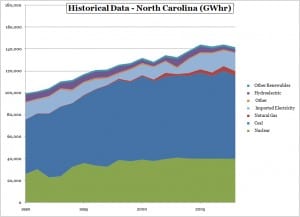 Forecast data proved a bit more difficult as I could not find North Carolina specific projections for electricity consumption, but the EIA provides consumption forecasts by region, including a detailed forecast of renewable generation. 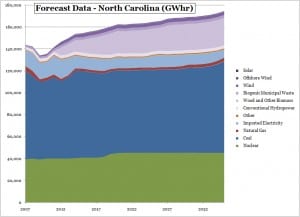 The data provided a two year overlap to the historical data I already had available. So, we could use the trend information from the region to develop data for North Carolina specifically.

Since renewable energy has historically played a very small role in electricity generation in North Carolina, all the various forms (excluding hydropower) were lumped together in the historical data. Fortunately, the EIA split these apart in some detail in the forecasted data. This allows us to examine each renewable option in more detail and adjust the numbers accordingly.

All renewables are represented in shades of purple on the forecasted graph in order to allow a clearer visual of the impact as we consider various scenarios. Some immediate information from the graph as laid out here to consider. First, a significant increase in the use of wood and other biomass in the generation of electricity is clear. This represents almost all of the gains in renewable energy with some modest gains for wind identified as well. Interestingly, virtually all new generation is presumed to be renewable based with only a small increase in nuclear and a modest increase in coal over this 28 year projection.

However, as has been stated by many, it is imperative to reduce our carbon dioxide emissions significantly or risk catastrophe on a planetary scale. This forecast is doing nothing to reduce emissions in North Carolina. Many have also stated that nuclear is not necessary and should also be eliminated. So let us explore those options here.

Claims have been made that distributing intermittent renewable sources like wind and solar will eliminate the intermittency issue and allow these sources to act as a relatively constant source of power. Thus not requiring significant energy storage capability. A second assumption is that transmission and distribution issues will not limit development of any renewable energy option. Both of these premises are key for the practical implementation of intermittent resources like solar and wind power. For the sake of argument, we will accept that premise as true and look at the relative scale of required facilities to generate sufficient power to fully replace all other generation, including imported electricity, natural gas (a limited resource), coal and nuclear.

One further set of assumptions, given the nature of hydropower and the already agressive plans in place for biomass, we will presume both of these sources will remain unchanged from the EIA forecast. This leaves just wind (on shore and off-shore) and solar to consider further.

According to NREL, North Carolina has about 2500 MW of developable land based wind installed capacity. As you can see from the map above this is located in the western portion of the state. We will assume that all of this is developed and generates at about 30% capacity. Given that wind operates at about 20% of capacity currently, this is a generous allowance for improved technology. That would mean potential on shore wind generation of about 6500 GWh.

2500 MW of wind would require 1000 2.5 MW wind turbines. Given the mountainous terrain, assuming 100 would be installed per year seems reasonable. The projected life of these turbines is about 20 years. New turbines would be required to replace older installations after that time. Each 2.5 MW turbine would generate about 6.5 GWh after installation. With maximized contribution from wind in the state, we’ve cut the amount of imported power in half. 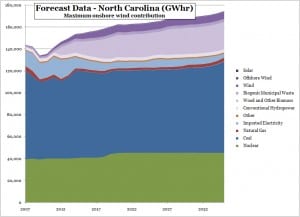 Off shore wind has been frequently discussed as a large untapped potential source for energy for North Carolina, but one can see that the contribution forecasts from the EIA data shows a very modest contribution to our energy needs even as far out as 2035.

Using data from a pro-wind group, 18,300 MW of off shore wind potential was identified. Assuming similar capacity factors, this has the potential to generate 48,000 GWh per year. The Cape Wind project in Massachusetts is planning to use wind turbines of 3.6 MW, assuming a comparable turbine size for any projects off the North Carolina coast means that about 5000 turbines would be required. Each turbine would generate 9.6 GWh per year after installation. Given the difficulty of installation, I’ve assumed 100 turbines can be installed in 2014, ramping up to 500 per year by 2020. 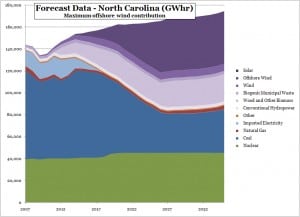 With this additional wind energy, the use of coal has been reduced by about half and no power is required to be imported to the state. Nuclear continues to contribute at full capacity as does natural gas.

The remaining renewable to consider here is solar power. In general North Carolina is not considered to be a great resource for solar power, but the sun does shine here, so in theory, one could install additional solar capacity. Again, in the EIA forecast, the added contribution of solar to the state’s electricity generation is very modest and, in fact, is a barely visible slice on the graphs.

Thermal solar power consists of using mirrors to concentrate sunlight on a liquid, heating the liquid up and spinning a turbine much like coal or nuclear power. This form of solar generation requires very consistent direct sunlight. As such, this is not practical for the North Carolina climate. The state is in a temperate climate with significant cloud cover throughout the year. For this reason, we will consider photovoltaic (PV) panel installations as the most likely candidate for use in the state.

There are dozens of claims regarding solar panel efficiency and power generation, but the most common value I noted was about 150 watts per square meter. Of course, that is the maximum output under optimal conditions. At best a solar panel operates at this peak output for six hours per day, assuming no intervening shade or clouds reduces the output. This means that one solar panel generates, at best, 0.9 kWh/day. Given North Carolina has both cloud cover and seasonal variation, an average daily output of 0.5 kWh/day per panel seems a reasonable approximation. One PV panel can generate 182.5 kWh/year.

First, let’s consider how many panels could be installed in residential applications. In 2008, the state claims there were almost 2.5 million homeowners. Assuming that renters cannot install panels on their home and that we could average 2 panels per house, that means that 5 million panels can be installed. This would generate 900 Gwh per year.

Commercial and industrial buildings could be well suited to solar PV on the roof top, but data is difficult to obtain. State statistics indicate 643,000 firms within the state. If we assume that each of them can install 10 solar PV panels on average, then an additional 6.43 million panels can be installed. This would generate 1200 GWh per year.

In addition, there are 52,500 farms in the state. If each farm installed 25 PV panels on the various buildings and roofed structures, then an additional 1.3 million panels, generating 240 GWh per year would be installed. 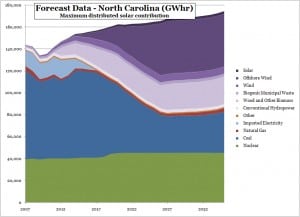 Total distributed solar capacity would be 2340 GWh/year with the installation of almost 13 million solar panels. Making the assumption that a million solar panels can be installed each year starting in 2011, results in a modest impact of solar renewable energy on the total energy mix.

In order for solar power to have more than a modest impact on electricity generation in North Carolina, industrial solar installations will have to be considered. 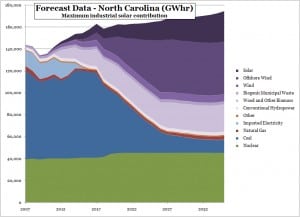 By looking only at the fundamental energy balance, ignoring the furor over baseload and energy storage, it is clear that renewable energy systems available today simply cannot fully replace forecasted energy requirements. Even after forecasting the construction of an additional 1000 land based wind turbines, 5000 off shore wind turbines, 13 million solar panels and 300 solar farms, insufficient energy is generated to eliminate all coal fired power plants. 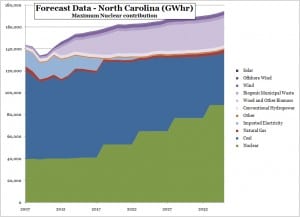 Each 1500 MW nuclear plant built generates almost 12000 GWh per year. Looking at the original forecast graph and assuming one new nuclear plant every five years within the state’s borders, at the end of the 2035, we would still require significant quantities of coal to generate electricity. We need to consider ALL of our options and build ALL of them as quickly as we can.

18 thoughts on “Why Baseload is irrelevant to the power discussion”